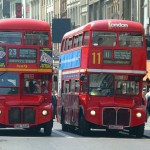 Getting to London with a small dog isn’t easy (though the PETS scheme has certainly made it easier), but once you’re there, you’ll be able to take your dog on all forms of public transit. The types of transit included under Transport for London‘s umbrella include the Underground (“tube”), buses, the Docklands Light Railway (“DLR”), river boats, the tram, and the London Overground rail system.

Dogs, either on leashes or in a carrier, are allowed on the tube and on London buses without charge. You must carry your dog on escalators and through the automatic ticket gates, and you cannot allow her on a seat.

The same rules apply [PDF] for the Docklands Light Railway, which stretches west to Bank, north to Stratford, south to Lewisham, and east to Beckton and Woolwich Arsenal.

And how about river boats, which serve both commuters and tourists? I couldn’t find a Conditions of Carriage that applied, so I wrote to Travel for London and asked whether dogs are allowed on board river boats, and under what conditions. Here’s what I was told: “This is at the discretion of the operator of the river boat service you intend to take. Each river boat service is operated by a different company. Please contact the operator of the route you are interested in. A guide to London river boat services which contains contact details can be found at http://www.tfl.gov.uk/assets/downloads/river-guide.pdf.”