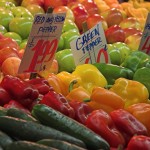 The Pike Place Market is one of Seattle’s delights, but the official word (in response to my e-mail query) is that dogs are banned from most of it: “Pets are allowed on the Pike Place Market’s streets and sidewalks. Because of our many open-air food businesses and restaurants, they are not allowed inside our buildings.” That’s a shame, because everyone who visits Seattle goes to the Market for at least part of one day, and it’s right next to a couple of parks and the waterfront — places where you’d like to have your dog with you for the rest of the day. On the other hand, the Market is often so crowded that it would be downright dangerous for a small dog — so I can’t really complain about the ban.

I suggest that you stow your small dog in a discreet carrier and carry her over your shoulder. There are some restaurants in the Market buildings, and you’ll have to make up your own mind about whether you want to break those rules. The bulk of the Market, though, is a bunch of small shops, food stalls, and craft stalls. A small dog completely enclosed in a carrier isn’t going to get anyone’s knickers in a twist — chances are, no one will even know she’s there.