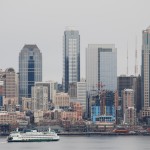 We take the ferry from Anacortes to the San Juan Islands frequently (and sometimes on to Sidney, B.C.), but the Washington State Ferries also go from Seattle to Bainbridge Island, Seattle to Bremerton, Seattle to Vashon Island, Edmonds to Kingston, Mukilteo to Clinton (on Whidbey Island), and Keystone (on Whidbey Island) to Port Townsend. There are also ferries from Fauntleroy (in West Seattle) to Vashon Island and on to Southworth (on the Kitsap Peninsula), and from Vashon Island to Point Defiance (in Tacoma).

You may either walk or drive on to all of these ferries. Old hands will often stay in their cars and snooze during the crossing, but all of the trips are gorgeous and worth seeing from the upper levels of the ferry. There is an elevator, if you have a bunch of luggage or don’t want to face the stairs.

Some ferries have a small café, and all of them have vending machines. It is perfectly acceptable to stretch out on the benches and snooze (unless the ferry is crowded and it would be cruel to take up a whole bench). Stroll on the decks, but be prepared: even during the summer you’ll need a jacket. People bring cards and board games to entertain themselves, they read, and a couple of times we’ve been within earshot of a really good guitar player.

Read the FAQ I’ve given you the link to for details, but put briefly, if your pup is leashed, you don’t have to stay down on the car deck (that used to be the case, but WSDOT has kindly recognized that “it is impractical to require walk on passengers and their leashed pets to remain on the auto deck for the duration of a voyage”). Now — but only if your dog is leashed — you’re allowed to walk briskly through the passenger cabin to access sheltered exterior passenger areas like “shelter decks, promenade decks and/or sun decks.” (This is a pretty generous policy, considering that BC Ferries, the neighboring system to the north, requires pets to “remain on vehicle decks for the duration of a voyage.”)

That doesn’t apply if you drive on with your pet, even if you have a leash with you in the car: “The policy allowing walk on passengers with pets to access exterior passenger spaces on upper decks does not apply to animals boarding in vehicles that can serve as shelter to drivers and their pets.”

Be aware that if you walk on with your dog, you will have to remain outside with her for the crossing, and while the exterior passenger spaces you can access with her will give you a better view than the car deck does, they will be windy and can be frigid.