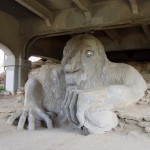 Photo by City of Seattle

King County Metro Transit has a long list of transportation services, but the ones you’re most likely to use are Seattle’s buses and the King County Water Taxi. Metro’s pet policy for its buses is as follows:

All dogs that are not service animals must be on leash.

Dogs are not allowed to occupy seats; they must remain either on the floor or sit on their owners lap.

Small dogs who remain on their owner’s lap ride for free. All other dogs pay the same fare as their owner.

Other small animals including cats, rabbits and small fur-bearing or feathered animals, are allowed on the bus as long as they are in an appropriate container or carrier. Fare is not required.

The transit operator, at his or her discretion, may not allow you to board with your pet if there is a concern for the safety or comfort of your fellow passengers.

I couldn’t find any language about pets on the water taxi (which has a seasonal route between Seattle’s Pier 50 and West Seattle, and a regular weekday route between Pier 50 and Vashon Island), but the two Metro representatives I spoke to said that dogs are allowed to travel on the water taxi, for free. (They couldn’t give me any more specifics than that, and I got the impression they’d never been asked the question before. The captain is the final arbiter of any pet-related issues that arise on board the water taxi.) [5/18/12 Alas, the website now addresses the issue, and says that pets are not allowed on board the Water Taxi.]

Please note that Seattle’s waterfront streetcar line has been out of service since late 2005. Some Metro buses have been painted to look a bit like streetcars and are labeled “Seattle Waterfront Streetcar Line” (their less romantic designation is Route 99). These buses serve “the downtown Seattle waterfront, Pioneer Square Historic District and Chinatown/International District.” The Metro pet policy applies to these buses.

The Seattle Monorail, a beloved vestige of the 1962 World’s Fair, is actually a privately-run business. The Monorail travels between Westlake Center in downtown Seattle and the Seattle Center; the trip is a mile long and takes about two minutes. Dogs, either leashed or in a carrier, are allowed on the Monorail.

Sound Transit operates buses (ST Express Bus, serving nearby cities including Everett, Issaquah, Tacoma, etc.), commuter trains (Sounder, stretching between Everett and Tacoma) and light rail (Tacoma Link, serving downtown Tacoma). The light rail system is currently in the process of expanding from Westlake to Tukwila, and on to Seatac Airport. On all Sound Transit transportation systems, “Pets may ride if they are carried in small containers.”

Seattle Streetcar runs the South Lake Union line of streetcars (its early, popular acronym, SLUT, seems to be here to stay) from downtown’s Westlake Center to the corner of Fairview and Ward. Leashed pets are allowed: “Guide dogs and companion animals are allowed on leash only.” [2/24/12 This language has disappeared from the streetcar site, but the customer service rep I spoke to told me the policy is the same as on Metro.]